While this year’s gardening tasks will be mainly aimed at keeping the vegetation in check, it’s hard to resist popping a few new plants in the ground during these warm early-spring days. And while I’m no green thumb, I’m no less ambitious in the garden than I am in the house. I tapped this enthusiasm recently and started a long-term project that I hope will eventually bear fruit – literally.

I started with this beautifully aged brick wall that edges our terrace: 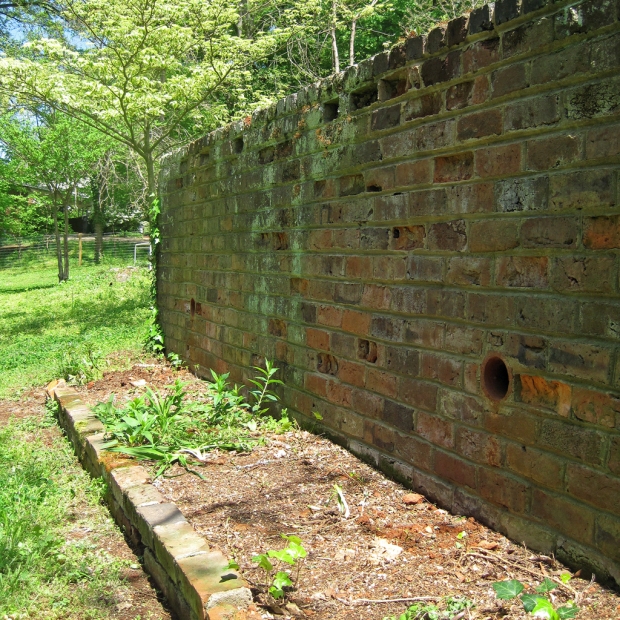 I drilled some holes in the wall:

I stuck some lead anchors in the holes:

I screwed a stainless steel eye bolt and shackle into the lead anchors:

From the shackle, I hung a section of concrete reinforcing mesh and planted a Kieffer pear tree just in front of it:

And then I chopped the top of the tree off:

I know you’re probably thinking that I’m really missing the point of this whole gardening thing.  But if all goes well, in the next couple weeks new shoots will form on the tree’s trunk just below the cut.  While the shoots are still pliable, I’ll bend them and tie them off to the metal mesh. And after a few years of attentive pruning, I’ll end up with an espalier (ess-pal-ee-ay) tree.

Espalier is the art of growing plants in a formal pattern against a wall or other structure. The technique was perfected in the Middle Ages as a way to maximize fruit production in small spaces, particularly in the cool climates of northern France and England. The wall retains the sun’s heat, lengthening the tree’s growing season and ripening the fruit more quickly. Espalier was also popular in America in Colonial times, with many fine examples on display in Williamsburg.

My tree will eventually have three horizontal tiers, or cordons. In my dreams, someday it’ll look  like this:

This is not a good project for those who need instant gratification. It’ll take three or four years to fully shape the tree, but ultimately I think the effort will be worth it. Especially when I can pluck a juicy pear directly from a branch just outside the back door.