There’s a point in every renovation project when you must face the unexpected. I knew it was too good to be true when the pest control man who inspected the Ordinary House before closing pointed to a few termite-eaten boards in the library and announced, “That’s it.” A 250 year old wood house in the muggy South and that’s it, huh? Dealing with the financial strain of buying the house, I was content to believe the guy, even though my left brain was screaming, “This joker’s on the pipe!”

So, I wasn’t altogether surprised when I demolished the walls of the kitchen-to-be and discovered some suspiciously crumbly wood. Since termites don’t leave telltale signs of their presence on the surface of the timbers they’re eating, I tapped the post a few times, listening for a hollow sound.

I poked the wood with my finger – it plunged right in. Then I grabbed a corner of the post with my fist and watched as it disintegrated into powder.

A few gentle taps with my hammer was all it took to reduce the post to a pile of dirty cellulose. After a few moments of abject terror, with visions of collapsing houses playing in my mind’s eye, I evaluated the damage. The good news: the infestation is no longer active and was largely isolated to a diagonal brace that was only structurally critical when the existing kitchen was a freestanding structure. The bad news: in addition to the brace, the little buggers got into the back of the siding boards behind it. 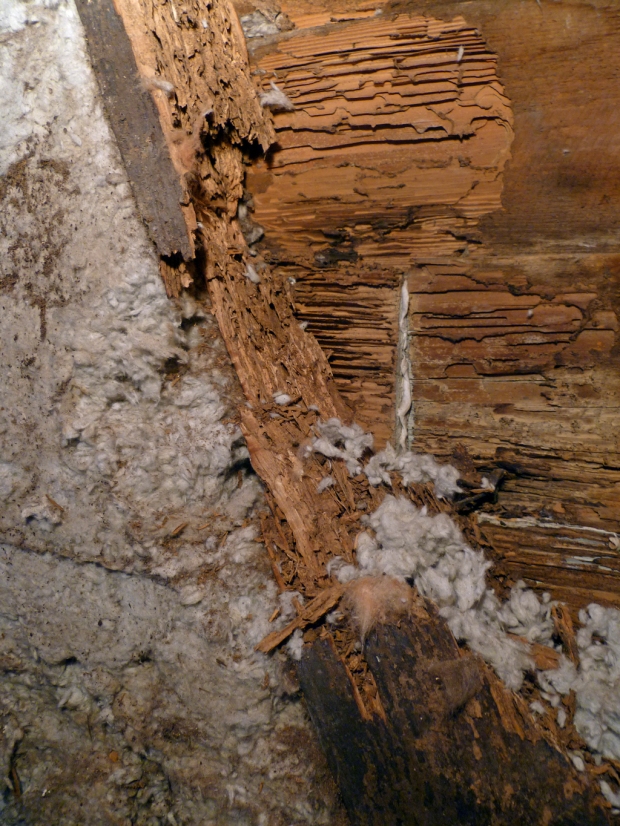 I’m not known for my unbridled optimism, but after years of architectural training and practice, I’m conditioned to turning construction’s inevitable lemons into lemonade.

The solution to the termite damage is is to completely remove it and put in a window that’s already on our list of “someday” projects. Though the trio of windows in the kitchen-to-be admit a decent amount of light, they’re east-facing which means the room gets limited light late in the afternoon and into the evening. The termite damage is on the west wall in a spot we’d already identified as window-worthy. In addition to late-day light, an opening in this spot will give us views to the backyard. 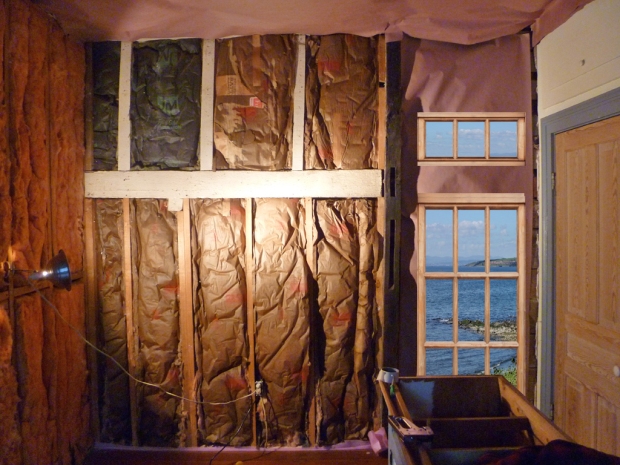 Didn’t realize our backyard had a Rhode Island sea view, did you? It’ll be a trick to figure out where to locate the window. That white beam in the picture continues across the wall on the other side of the post; it’s actually the ceiling beam of the kitchen, down the stairs on the other side of the door. A transom window above the beam might keep the main window from feeling awkwardly low. Clearly, I’ve got some design studies to do.

The main reason we didn’t include the window in our original plans was that I wanted to pull a building permit quickly so that we could get the kitchen project underway. Since we’re smack in the middle of the Hillsborough historic district, any change that impacts the outside of our house requires the approval of the Historic District Commission, of which I’m now a member (I hear the boos – don’t hate the player, hate the game). HDC approval requires additional documentation to be submitted in advance of a monthly meeting, and approval must be granted before a permit can be issued. Fortunately, with a building permit already in hand, I can continue working on the the kitchen interior while I prepare for the next HDC meeting.

My elementary school art teacher used to say, “mess up, fix up” as a way to encourage us to recognize the hidden opportunities in mistakes we made while working on our noodle art. Who knew I’d be putting that lesson into practice 25 years later while restoring a house?