We’re told that our house is home to two ghosts. The first is that of Jane Hayes, a young girl who died of consumption in 1850. She’s a typical ghost, ethereal and wispy, able to float through walls. The second specter is odd: a cat’s body with the head of a man. The story goes that the face belongs to William Hayes, a physician who kept his offices in The Ordinary House in the 1920s, and who believed that humans were reincarnated in the form of animals. We’ve not yet had the pleasure to meet either of these apparitions, but I’m soundly convinced that we’re haunted by a third ghost, one who is bound and determined to keep us from having functional heating and air-conditioning. After last year’s boiler breakdown and this month’s furnace failure , I hoped that we might be free of HVAC woes for a few years, at least.

But recently, while doing some remedial framing work in the kitchen, I yanked out a piece of wall insulation and was surprised to feel a sudden whoosh of air. I watched as some sawdust on the floor was sucked into a void in the wall. A bit of poking around with a flashlight was all it took to discover the problem.

When crafting return air ducts, particularly in old houses, HVAC contractors will often “pan” joists. That is, they line the voids between framing members with sheet metal to create boxes that collect return air and direct it back to the furnace. The return for the downstairs HVAC systems begins as a sheet metal box above the floor, transitions to a panned joist cavity in the crawlspace which in turn connects to a duct leading to the furnace.

Our HVAC installation technicians probably didn’t stop to think that there’s nothing normal about the way The Ordinary House was built when panning our joists. In contemporary wood construction, the floor structure ends at a rim joist. The floor cavity is separated from the wall framing by subfloor and a 2×4 wall plate, like this: 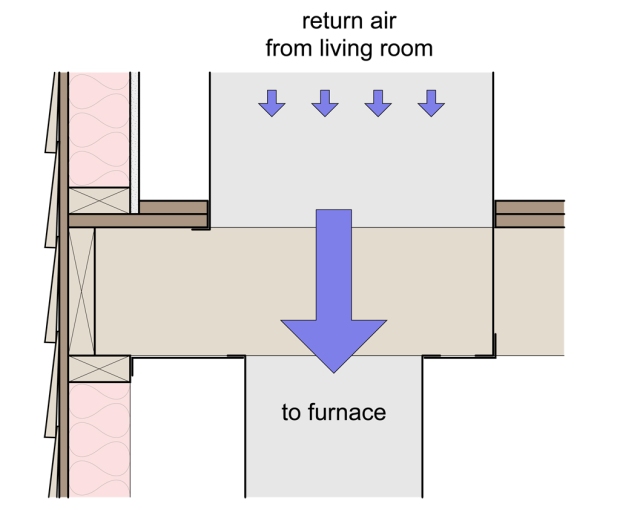 In our new kitchen, the walls are partially “balloon” framed, meaning the wall studs are continuous from the foundation up to the ceiling – there’s no subfloor or wall plate to separate the wall cavity from the floor framing. So, for the past year, our HVAC return air has been pulled from the wall vent in the living room, where it’s supposed to, and from the INSIDE OF THE WALL through filthy fiberglass insulation.  To complicate matters, our siding sits directly on the wall studs rather than on top of plywood sheathing. Tiny gaps in the siding placed under negative pressure would have admitted freezing outside air to the return duct in the winter and hot, muggy air in the summer. This means, of course, that the system was working overtime to heat and cool the air. Fortunately, the filter is located at the furnace, so at the very least, the air was being cleaned. 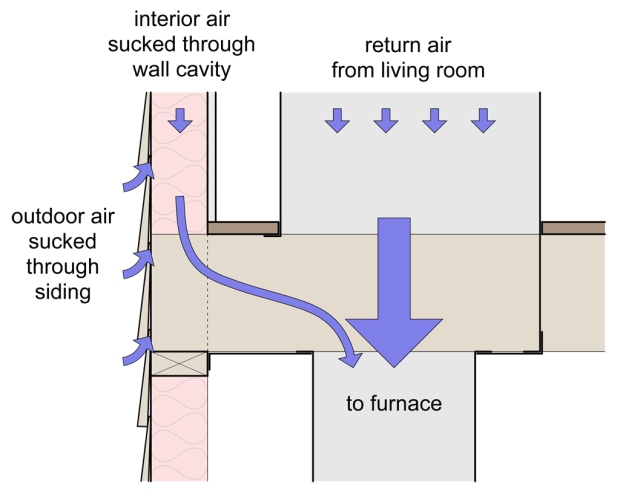 I’ve filled the gap between the wall and floor framing with wood blocking and plenty of duct sealing mastic and spray foam so I can be certain that the return air is being pulled only from the living room, not the inside of our walls or through the siding.

As the snowflakes fall outside, I hope that I might have finally exorcised our HVAC ghost.

The human-head cat ghost, on the other hand, is welcome anytime.