A word of advice: never celebrate the one-year anniversary of a one-room renovation project, no matter how ambitious it is. I’m ashamed to say that we recently blew threw that milestone after life did its very best to sap my enthusiasm. But recent weeks have played witness to some honest-to-goodness forward movement. I’ll share details in posts to follow, but among other things we’ve recently passed framing, plumbing, mechanical, and electrical rough-in inspections, re-insulated the walls, purchased appliances, ordered cabinets, and started to install wall and ceiling surfaces.

Even under the best of circumstances, though, I’m a slow designer and builder. I’ve accused myself of overdoing things in this forum before, and now I’m going to show you how that plays out, and why the most mundane tasks take me days to complete.

A couple weekends ago, it was finally time to install a cap for the duct to the new hood vent. Here’s how the last guy to renovate our house did it: 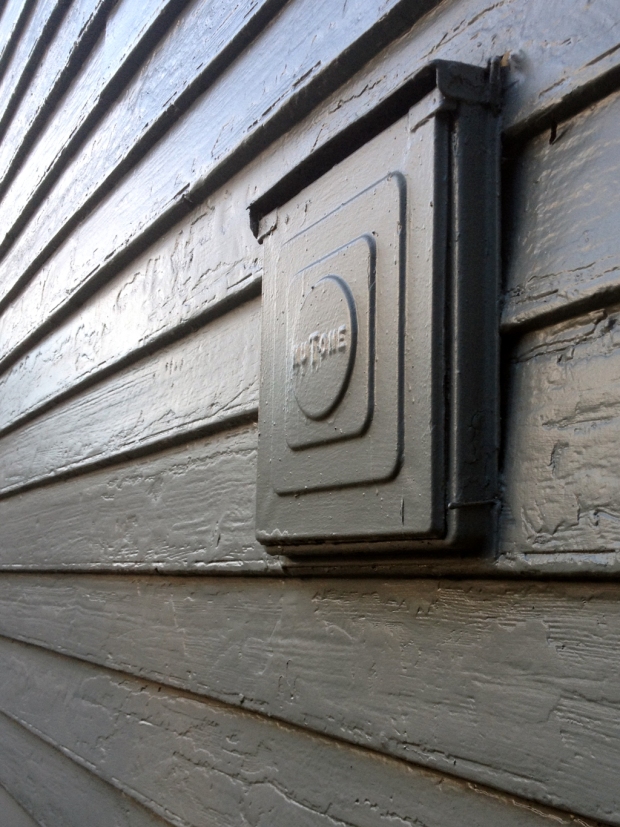 Nice, huh? Cut a hole through the siding, slap a vent cap over it and get back to the serious business of drinking beer. To this day, this vent leaks voluminous quantities of outside air and is no doubt a bug superhighway in the warmer months.

I knew I could do better.  A lot better.

First, the nerve-wracking portion of the project: I cut a hole in the house: 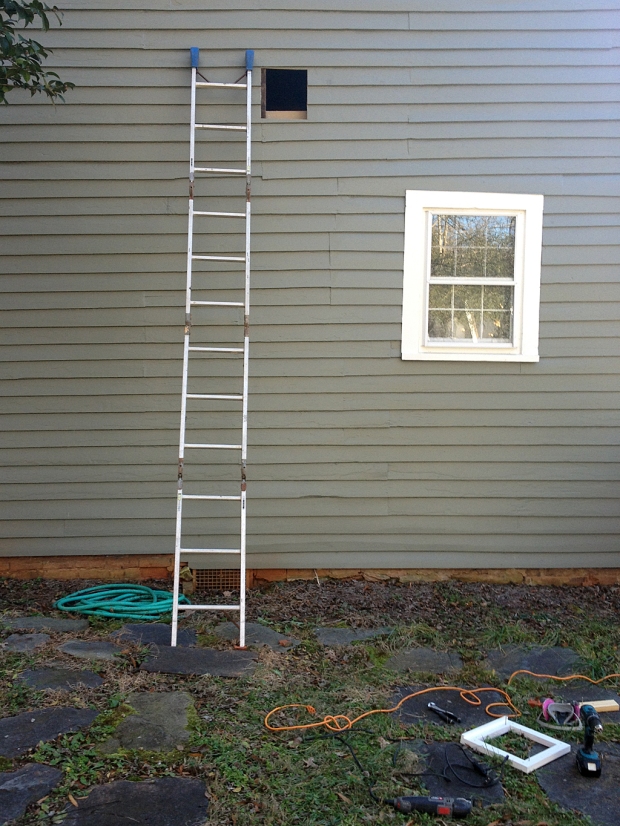 Here’s a closer look at the hole. You can see the old white oak framing, the siding directly on the studs, and the blown-in cellulose insulation, undoubtedly the itchiest and dirtiest material known to man.

Next, I primed the edges of the exposed siding to seal them against moisture.

Without sheathing, there’s nothing to attach a vent to, so I framed a supporting structure just behind the siding.

With a sturdy frame in place, I flashed the opening. An aluminum drip flashing protrudes over the siding at the bottom of the opening, flexible flashing tape wraps over this flashing and up the sides of the framing. The tape extends underneath another aluminum drip edge at the top of the opening. Working from bottom to top like this establishes a continuous path for water to drain down. 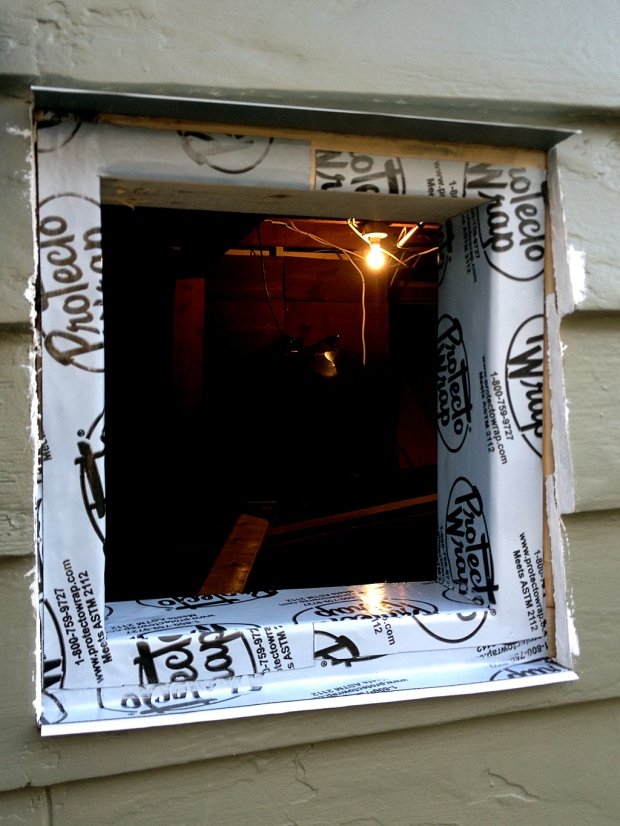 After flashing, I built a custom wood frame to support the vent and trim out the siding. The frame has a cap with a tapered top and a drip kerf on its bottom side. The frame has thick wood sides that mimic the nearby window trim. I primed it on every surface and put it in place with stainless steel screws.

With the frame firmly affixed, it was finally time to install the vent cap. I ordered a copper cap with a damper and a bird screen. Yes, I could have bought a flimsy galvanized vent at the home center for significantly less money, but this one will last a bazillion years and look good doing it. I put a thick bead of caulk along the top and sides of the rear of the cap, but not along the bottom to allow any incidental water to drain. The cap was screwed in place with brass screws. 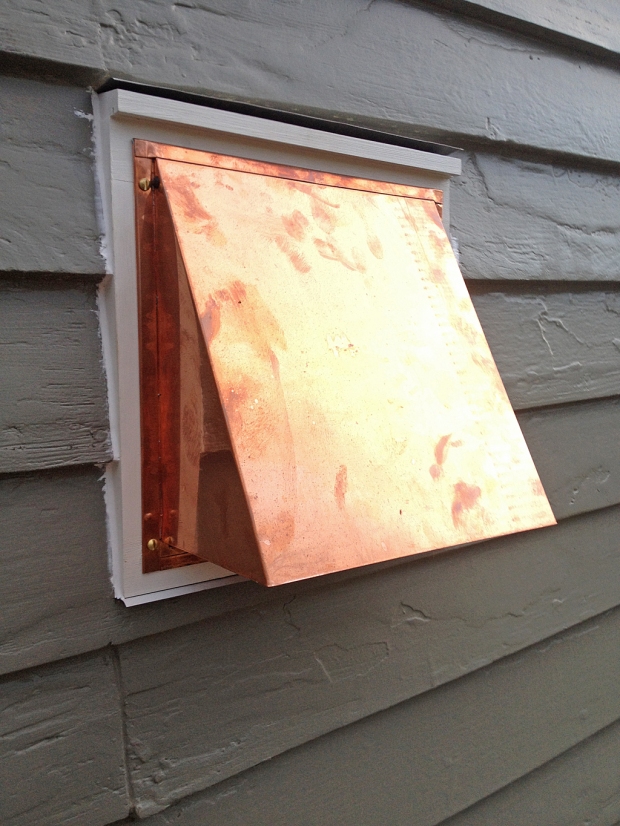 After caulking the gap between the wood frame and the siding, I applied two coats of paint. I think it looks pretty good and it’ll keep looking better as it weathers from orange to brown to verdigris. 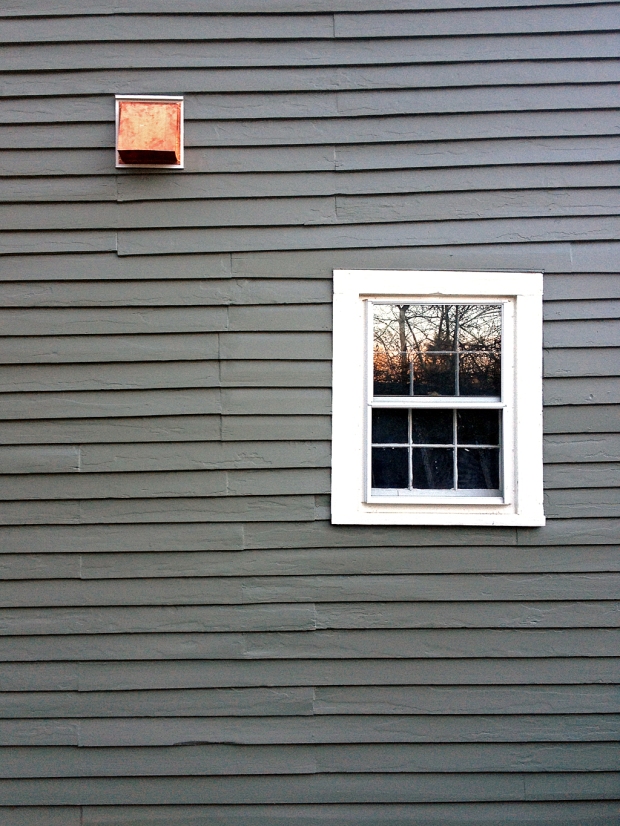 And that’s how I translate a job that took the last guy a couple hours into a weekend-long project.