Before tour: the hall bath

I can sum up the upstairs hall bathroom in one word: yellow.  It’s very, very yellow, which Weezie likes to remind me is a color often associated with a frequent bathroom-based activity.  That’s my girl. 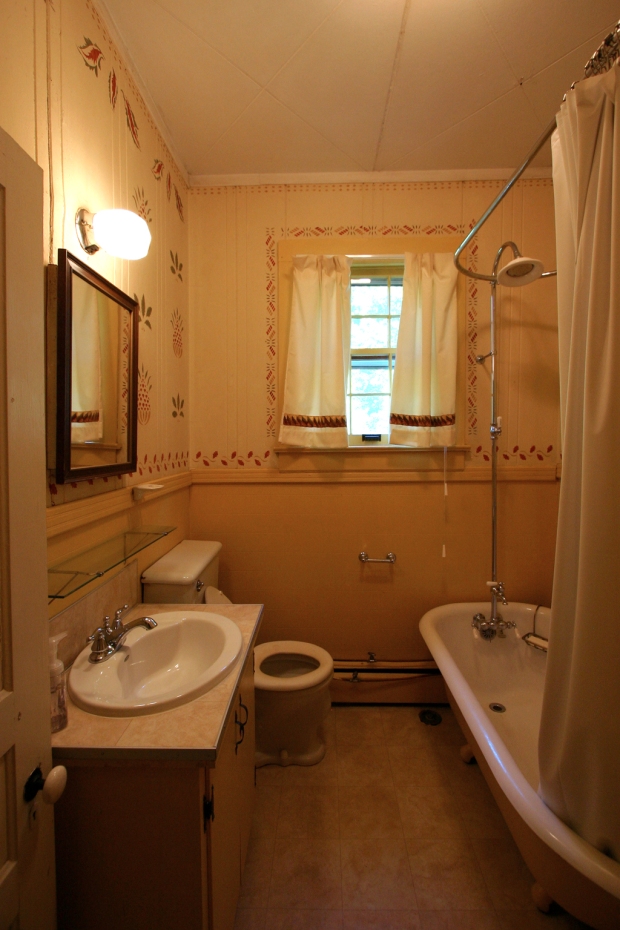 The layout is a conventional three fixture setup with a toilet and sink on one side and a tub on the other. A small east-facing window admits some light without compromising privacy. At the other end of the room, a sizable linen closet pokes into the adjoining hall, providing plenty of storage space.

Here I’ll insert my oft-repeated analysis of the condition of rooms in this house: the space is reasonably functional, but in desperate need of an aesthetic overhaul. The embossed and stenciled fiberboard wall and ceiling panels are getting a bit haggard. The vanity is plain and the vinyl floors unremarkable. One exception is the clawfoot tub which is in good shape and is worthy of preservation, though it’s been plumbed with exposed copper tubing that restricts water flow to a trickle.

And then there’s the infamous old toilet, recently replaced. Of it, Weezie writes:

While it may seem odd for such a young blog to have more than one entry about toilets already, the toilets themselves were not so young. And the last of three toilets to go certainly deserves mention. The guest bathroom beauty was a cast iron relic stamped with the year 1918 (that’s 95 years old for those of you trying to do the math in your heads). While we both enjoy Downton Abbey (at least the first season) and find the era that it depicts fascinating, that fascination does not extend to the plumbing of the time. Part of me would like to see that toilet celebrate its centennial, but deep down I know that a toilet that predates the Treaty of Versailles (or the Carter administration, for that matter) has got to go. So, for the good of our water bill (and our guests), this throne has been dethroned in favor of another Toto Drake II. I’d like to think that we’ll find a tasteful way to preserve it as some sort of yard ornament, but if you look in the dictionary, “tasteful toilet yard ornament” is the first entry under oxymoron.

For now, the hall bath works for our infrequent guests, but I’m sure there will be some more urgency about improving its condition once it sees more regular use.